After years of employees working from home thanks to the pandemic, some companies and commercial landlords are finding it difficult – and even unnecessary – to bring workers and new tenants “back to the office” the way they were prior to Covid.

This has resulted in landlords modifying workspaces and some corporations renovating their already existing office space to become “hybrid” workspace, according to a new article by Bisnow. The publication reported this week that supply chain issues and rising rates are likely also helping fuel the move.

Even architects are paying attention to the new changes. American Institute of Architects Chief Economist Kermit Baker said this week that firms are making more income from renovating existing workspaces than from building new ones. “Architecture firms are drowning in work,” he said.

CBRE Global Head of Occupier Thought Leadership Julie Whelan noted that there is an “onslaught” of renovations taking place, as landlords look to change their properties to appeal to future tenants and existing tenants modify their workspaces.

767 Third Avenue, for example, is about to be in the midst of a “wholesale demo”, led by Sage Realty, and costing $53 million. This renovation will allow for “a new lobby space and a reworked amenities program for tenants, including a library, terrace garden, cafés and communal spaces,” according to the report. The hope is to attract boutique companies and maximize space for amenities for tenants.

CEO Jonathan Iger commented: “The mindset right now is that you have to be reinvesting in your property. It’s about how you define quality.”

Another major renovation is being led by Brookfield and WatermanClark, who are investing $100 million into renovating the midcentury Lever House in Manhattan. Chicago’s Merchandise Mart and Boston’s One Post Office Square are also getting multi-million-dollar renovations.

Baker continued, stating of the demand for work: “They’re so busy they’re having trouble finding staff, and there are project backlogs. The pipeline for new architects isn’t as quick and easy to expand as other professions.”

Whelan concluded: “Office construction is falling off a cliff. All that work going into a new build is going into renovating space now. Very few will take a risk with the way the debt market is now.”

“Real estate has never moved quickly. That’s the nature of the beast. Frankly, it never had to, with long-term leases. And the pandemic turned that on its head. It’s an inflection point, and you need to do it or buildings will just become obsolete.”

Brought to you by Kevin Thomas at OC Industrial Group. 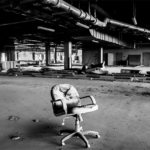