The current momentum surrounding the commercial real estate market is exciting, but information, perspective and a solid team behind you will ultimately determine whether you thrive.

For SVN and the industry in general, 2013 was a banner year in commercial real estate. Investors worked to move past the recovery paradigm, driving property trades to their highest levels since 2007, and rebounding more than threefold from the 2009 trough. As 2014 kicks off, I want to share my perspective on last year’s business, and offer a look ahead for the commercial real estate investments market. This year is well positioned to capitalize on last year’s momentum.

The current real estate industry is strongly influenced by cyclical forces, including a growing economy, improving property fundamentals, modest construction and easier access to financing. These forces collectively offset the drags that rise in the wake of tighter monetary policy, rising interest rates and uncertainties relating to the job market. This activity is further bolstered by a shift to secondary markets and small and mid-cap assets.

The market is also being defined by trends beyond the industry itself. If housing finance reform gains traction during the current Congress, it could permanently alter the cost of availability of debt for all housing classes. New technology is further altering the way we find and use space as tenants and investors. It is also challenging how we facilitate the real estate investment market. Favor is given to more open and efficient ecosystem, and the market participants who embrace it. These trends suggest an industry where collaboration and open platforms replace fragmentation and information asymmetry. The business is changing with the technology, bringing fresh opportunities for innovators.

New Trajectory For The Economy And Industry

The market’s broader investment momentum was supported last year by the increased confidence displayed by both buyers and lenders toward their economic expectations. Their positive assessments were bolstered during the third quarter when, despite headwinds from the government shut down and debt ceiling debate, the economy expanded close to its fastest pace since the recovery began. The consensus projection puts GDP growth near 3 percent in 2014 and 2015. This is closer to its potential, while inflation is expected to remain subdued.

Chandan Economics also reports that interest rates on long-term commercial mortgages increased marginally across 2013. Financing is no longer at a historic low, but the availability of secured mortgages has improved dramatically in secondary markets. In the period following the financial crisis, traditional sources of commercial real estate lending were largely disengaged. Bank lenders had refocused on managing legacy distress and, under pressure from the regulators, hesitated to make loans to all but the most established borrowers. CMBS conduit lenders were absent from the market altogether. This year, we believe the more active regional and community banks, credit unions and CMBS lenders will become critical pieces of the market puzzle.

Last year, the most liquid prime markets – including Los Angeles and San Francisco – saw continued capital inflows from large institutional investors. The frenzy of bidders on trophy assets was not limited to public REITs, large real estate operating companies and domestic pension funds. As global economic conditions stabilized, foreign investors and lenders flocked to the U.S., seeing it as their best opportunity for long-term capital appreciation.

The relative saturation of leading markets with equity and debt capital has been core property yields hold at rock bottom even as interest rates trended higher. With trophy and large cap prices surpassing pre-crisis peaks, the upside in these market segments is more limited than in recent years. Some buyers are constrained by investment criteria that limit their moves out of global cities. Buyers that are not so constrained are joining private investors in seizing opportunities for returns in the mid and small cap segments.

The plodding recovery in secondary markets contrasts sharply with conditions in high visibility metros. Investors and lenders have been wary of re-engaging too early, even among secondary markets that have recorded breakaway growth in the energy, tech and new media sectors. That wariness diminished considerably in 2013, aided by reinvigorated CMBS conduit lenders. The long-anticipated secondary market rebound is well underway, and each succeeding quarter sees secondary markets accounting for a larger share of overall sales volume. That trend will carry forward into 2014, and the year will belong to small and mid-cap properties and investors.

The prospects for commercial real estate are bright. Downside risks remain a feature of the market, but are overshadowed by strengthening tailwinds. Thankfully, this statement now applies to investors across a wide range of markets, stark difference from the early recovery period where it would have applied to very few. Those who successfully engage on this leger investment landscape will appreciate the fact that information and insight are more important than ever. I am confident that the real estate environment in 2014 is one we are well prepared for, and one in which we will ultimately thrive. 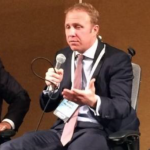 OC Industrial: All Revved Up, No Place to Build