Most of the absorption was in Class A space in Irvine, a major influence on the countywide market. Irvine contains about 30% of the county’s 110.4 million sq. ft inventory and most of the premium space. Its vacancy rate has fallen nearly two percentage points since the first quarter, settling at 10%.

Overall, the county has recovered about 7.0 million sq. ft. of occupancy since the shock of the recession wore off in mid-2010 with vacancy at 17.3%. Most of the absorption occurred in the recovery’s first three years but went negative over three combined quarters before the upturn in Q2 with 728,712 sq. ft. coming off the market. The countywide vacancy rate closed the third quarter at 12.7%. That included three new buildings that added some 505,000 sq. ft. to the inventory.

Job growth in Orange County also has been impressive, particularly in banking and finance until recently. Since household unemployment peaked at 9.6% in 2010, it has fallen to 5.4% in August and down from 5.8% a year ago. Since then, non-farm employment gained 17,900 jobs or 1.2%. The latest state Employment Development Department’s report said August-to-August job gains in Orange County totaled 5,500 for education and health services, 5,300 in leisure and hospitality, 4,500 in construction, 4,000 for business services. Transportation,
information, manufacturing and other services added 6,000 jobs. But after adding about 8,500 positions from 2011 to 2013, financial activities lost 4,200 jobs for the year through August and government employment was down by 3,100 jobs, the EDD report said.

Nevertheless, confident in continued strong demand for space in the Irvine Spectrum, the Irvine Company is getting under way on construction of a 20-story building. The 450,000-sq.-ft., stainless-steel tower would be the first new building in seven years at the Spectrum, a major center for jobs, shopping and entertainment. The Spectrum has an office vacancy rate of about 8% compared to 12.7% countywide. The company recently completed a new tower in its prestigious Newport Center with asking rents from $6 to $8 per sq. ft., according to reports. 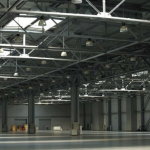 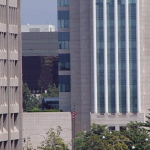