Workers abandoned their office buildings in 2020 and have migrated elsewhere. Those in real estate ask themselves when office employees will return. Others wonder if they’ll return. Back to that existential question in a moment.

Turning this data around, 71% of the city’s buildings are leased. Sadly, that figure is somewhat misleading. In the age of Covid, a building’s occupancy rate is a far more critical metric than its leased rate. Kastle Systems, a workplace security company that requires office employees to swipe entry cards, provides precise occupancy data. As of this writing, San Francisco’s overall occupancy rate—the workers who actually show up—is 39%.

A 39% occupied building may have a happy ending, but—like falling in love with someone with a bad heart—you could find yourself praying in the emergency room before it’s all over. Meanwhile, with the exception of the swankiest buildings—say, Sales Force Tower—rents are plummeting, tech is down 24% on the NASDAQ and shedding workers like winter coats in Miami.

None of this is news to the office world’s big hitters—its major league owners, lenders and brokers. In fact, the country’s biggest banks have all but ceased lending on high-rises and big equity, the kind you need to buy a $500 million building, has run for the exits.

“There is almost no liquidity in the office market today,” a seasoned mortgage broker proclaimed. “No one knows where pricing will be when one of these towers finally does sell.”

I asked a handful of industry leaders how much high-rises had dropped in value over the last two years. Their guesses—yes, guesses—ran anywhere from a decline of 25 to 60%. This broad lack of consensus is part of the problem; without consensus on value, there is no marketplace, leaving office buildings buried under ten feet of permafrost.

Why? Back to those missing workers. No one knows how many employees will eventually return.

Assuming you’re OK with deep recessions, the rosy scenario for a prodigal worker homecoming goes like this: tech’s massive lay-offs will continue, employers will regain the whip hand, and they will force their employees’ return.

One pundit believes that clever workers will come back on their own once they realize that remote working sets them squarely at the lip of Mount Doom. How? If work remains remote—if employers capitulate to it—companies will stop paying $220,000 a year to some guy coding from his Snake River shack when they can get the same quality from Mumbai for $90,000.

The problem with this homecoming prediction is its underlying assumption that tech actually wants its employees back. A few CEO’s of small to mid-sized tech companies interviewed explained how efficient they were running remote.  This one had total consensus: they’re all humming along, 90-100% as effective as they were pre-Covid.

That may not be true for the FAANG’s of the world, and it certainly isn’t true for start-ups—everyone agrees that nascent companies require all hands to huddle endlessly. But between Google and a garage venture, there must be hundreds, if not thousands, of companies with no need to revisit downtown anytime soon.

Despite all the troubling economic news, many of us thought real estate would cough up few good deals because of the trillions in opportunity funds desperately seeking yield. Office buildings could prove an exception. In five or six years, we may well look back at 2023-24, whack ourselves on the forehead and swear, “How the hell did I miss that? I could have bought Class A office for fifty cents on the dollar.”

If you’re willing to place a career bet on the return of the office workers, you could possibly reap the biggest reward real estate has offered since 1992. For what it’s worth, I do think the employees will return, albeit with more flexibility, and landlords will again be happy with their cash flow.

For my money, I still like steady eddy industrial.

Businesses Are Renovating Their Offices For “Hybrid” Use 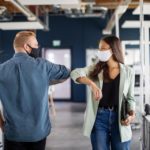